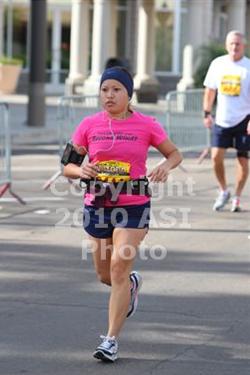 This weekend was my first marathon. Excitement set in the night before making it hard to sleep which worked out for the best since I woke up way before my alarm turned on and it gave me more than enough time to get any last minute things together. Little did I know that it was not going to be the day I wanted it to be.

I arrived at the light rail an hour early and when the train finally came, it was off to the race. As I was sitting there, waiting for my stop to arrive, I began to realize, “Oh my goodness, I might be late.” Was I late? Yes! How could my timing be so off? Once the train arrived, I made a mad-dash to the race. During the 1 1/2 mile unscheduled pre-run, I see that my corral has already taken off. (For you non-runners: a corral is the crowd of people you are grouped with that holds the estimated predicted finish time as you.) My heart sinks. After dropping off my things, I run quickly past the start line without even thinking to stretch. Now, at this point, all I could think of was to keep my pace steady, but I really wanted to catch up to the other runners, so this possibly made me run faster than expected.

Finally, mile 2 comes and a few runners are in sight…I felt so much better. My legs felt great, like I could run forever. Then mile 8…I began to feel a tightness in my right foot. Instead of stopping, I pushed through; after all, if it was a minor cramp, it would work itself out..it always does. This one was different though and one that seemed to jump to my left foot as well. The cramps continued for 5 miles, and these weren’t just the ones that hurt, these were the ones that make your toes curl underneath your feet, a huge problem. Eventually, the cramps went away, but left my feet feeling sore and uncomfortable. But, the run wasn’t over, though I wish it had been at that point.

The next few miles consisted of running and walking to ensure that my feet didn’t cramp up again. After I felt fine to truly run again, I took off at a brisk pace that was less than my average pace, but enough to make it a comfortable run for me. Feeling a little deflated, I reminded myself that this was only for me, no one else. I told myself, “Everything is fine…no worries.” Knowing that I was way behind schedule, my goal changed from a set time to just finishing and feeling good that I did.

Unfortunately, the bad news didn’t end. At mile 20, I sprained my ankle. I only knew this because I’ve sprained this ankle before. At that point, I felt defeated. A Subway was approaching and I even thought maybe it was time to call it quits and give Ben a call to pick me up. Instead, I found some strength in me to finish. It was the longest 6 miles of my life, but I was determined to walk it. You can’t quit when you’ve already completed 20 miles.

To be quite honest, usually the crowd and cheering makes me love every moment of running more, but this day, it did not. Every time I heard some words of motivation, I almost broke down in tears. At the end, I made a tiny effort before the finish line to jog and a piercing pain shot through my ankle. Needless to say, the photographs at the end were of me in tears.

Though I know it is an accomplishment to complete a marathon, it is hard knowing that a goal was not reached. And to have to come to terms during a run or an event that you might have to walk is an even worse feeling. I can truly say that I am glad the marathon is over and that perhaps, I am not built for such distances. I may one day try to train for one again to redeem myself, but I think I am returning to half marathons. I find that the half is enough to make me feel accomplished while still having fun.