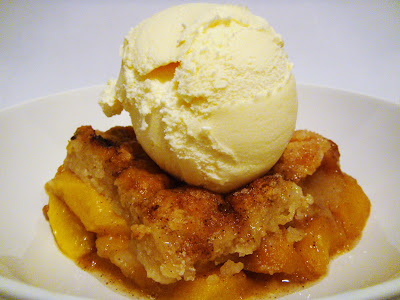 Yes, my goodbye to summer seems like it is coming a bit late considering autumn began in September, but if you’ve ever lived in Arizona, you would know that the summers are quite long here. This year, especially, has been unseasonably warm. But, as soon as I almost gave up on believing that the cool weather would ever arrive, I was pleasantly surprised last week when temperatures dropped to the cool 70s in the evenings. A much needed break from the scorching 100+ degrees.

Anyways, this year’s summer was quite grand. Among some of the highlights were a surprise birthday party, adding a new member to our family, the beginning of my marathon training and a fantastic dog party. I can only hope that autumn will bring as much excitement and laughter as I had throughout the summer months.

I now leave you with a yummy peach cobbler recipe that I hope you will enjoy. And please, don’t forget or skimp on the vanilla ice cream when serving. 🙂

« My Favorite Shirt
Taste the Rainbow »